The frequency range in which the Yagi-Uda antennas operate is around 30 MHz to 3GHz which belong to the VHF and UHF bands.

The figure shows a Yagi-Uda antenna. It is seen that there are many directors placed to increase the directivity of the antenna. The feeder is the folded dipole. The reflector is the lengthy element, which is at the end of the structure. 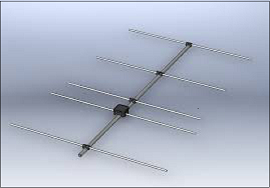 The figure depicts a clear form of the Yagi-Uda antenna. The center rod like structure on which the elements are mounted is called as boom. The element to which a thick black head is connected is the driven element to which the transmission line is connected internally, through that black stud. The single element present at the back of the driven element is the reflector, which reflects all the energy towards the direction of the radiation pattern. The other elements, before the driven element, are the directors, which direct the beam towards the desired angle.

For this antenna to be designed, the following design specifications should be followed.

If the specifications given above are followed, one can design an Yagi-Uda antenna.

The directional pattern of the Yagi-Uda antenna is highly directive as shown in the figure given below.

The minor lobes are suppressed and the directivity of the major lobe is increased by the addition of directors to the antenna.

The following are the advantages of Yagi-Uda antennas −

The following are the disadvantages of Yagi-Uda antennas −

The following are the applications of Yagi-Uda antennas −